Hello, folks! Originally I was going to publish couple of electricity-themed drinks today, Black Lightning and Electro… but describing “electricity as a taste” proved out to be very hard task indeed.

I once got electrocuted at work, because of my own stupidity and carelessness; I still remember “the taste of iron” in my mouth… I have vivid recollections how my joints and root of my teeth ached for couple of days, weird pain I’ve never experienced before or since the accident…

…I’ve no intention of giving my readers such a pain, but creating “iron-tasting, dust dry aroma that still is remotely enjoyable as a cocktail”… that’s a challenge! I’m working on it, not going to be published today, sometimes later…

Instead of electric drinks, request from a reader “D”. He politely asked if I could create cocktails for Iron Patriot and/or War Machine… I expected the task to take some time, but after swiping electric drinks aside (“removing a writer’s… erm, “cocktailer’s” block for now”) proved out to be right choice; those requested drinks practically designed themselves surprisingly quickly! 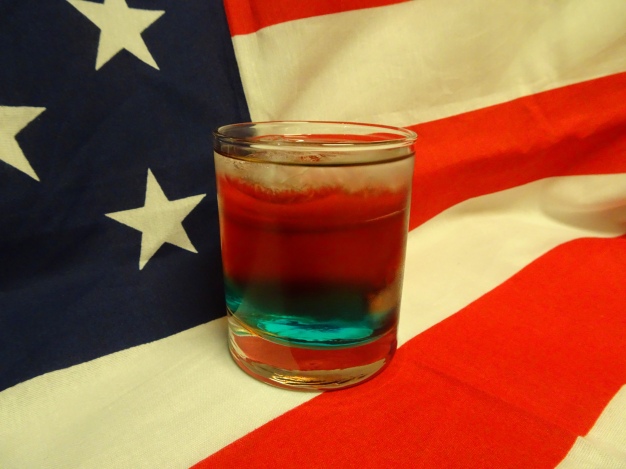 Shake layers with ice separately. Add ice to the old fashioned glass and layer the colours into the glass, from bottom to top. The amount of ice is something to test out yourself: there should be something left when you gulp down the last of the blue layer… if the ice melts before finishing the drink and it gets “warmer” (less cold) the intense sweetness might turn out to be intolerable to enjoy.

So, what’s the design philosophy behind Iron Patriot?

(American) Patriot: This drink had to be Red, White and Blue, of course… but I just didn’t want to leave that concept there. In my first ever post I designed The Man of Steel pretty sweet… since Superman stands for “Truth, Justice and The American Way”, and stereotypically everything American is Really Sweet (no offense, US readers, just jesting around here)… among that same guideline Iron Patriot has sweet layers (two out of three, at least).

Iron: Mechanical aspect of the character is represented in the taste. I know the exoskeleton is ultra high-tech, but mezcal’s smokiness adds “steampunkish” feel… and it balances out the sweetness nicely.

Mezcal is a repeating element in every single layer, and that proved out to be good idea (in my humble opinion)… white layer: “Oh Jeez, this is a lethal drink!” (well, these exoskeletons are nothing to be fooled around with)…

Red layer… “oh, that’s a nice relief after that sharp white taste”… but somewhere there, even if this layer is sweet, there is something “mechanical and synthetic” in there… yes, good ol’ Amaretto I used in Iron Man to create that same sensation.

Moving from white to red… transition has certain smoothness, because of that mezcal in both layers.

Blue… still, there is certain seamless transition here, mezcal continuing to “giving out its smoky exhaust fumes”, but “mechanical” takes another form… “okay, of course this layer is the most sweet because of the layering density mechanics, mezcal aroma still there… but also other kind of “technical aroma” clanging to the teeth…”

San Cosme is basically the only mezcal I use in my cocktails these days, save the occasional Oaxaca Sunrise (cheapo Lajita’s raw taste works out fine in that drink).

I’ve praised De Kyuper’s Sour Rhubarb quite enough now, it found its way into Iron Patriot The Cocktail also. I must try not to overuse it, drown every single cocktail with it.

Summa summarum… Iron Patriot: American patriotism in colour and sweet taste, exoskeleton’s mech ‘n’ tech in taste. I hope you enjoy it, althought it’s a bit laborous… next one is much more simple to make…

Yeah, I know… these hi-tech exoskeletons certainly don’t spew out spend  .357 Magnum casings, but there’s something in the name “War Machine” that compelled me use them 😀

dash of Gammel Dansk or Cynar

Build into a highball glass with some ice in it.

Jack Daniels and Coke is old news… but Coca-Cola Energy Drink adds a whole new dimension to that classic.

I was hesitating… is it such a good idea to use this beverage as a basis for the cocktail? I don’t have a clue how widely it’s available in different countries: in Finland I had to order it from webstore (verkkokauppa.com, for Finnish readers interested in checking it out), imported from UK. And sorry for a horrible pic.

There’s no taurine in this energy drink, so the usual “sting” is missing… but there’s different kind of “pleasantly grim/desolate” aroma (can’t describe it in English, sorry)…

I wouldn’t use traditional JD in this one: its taste is so sharp it kinda cuts down the energy drinks peculiar aroma too much… I would go with Jim Beam, with its smoother taste.

Amount of Gammel Dansk/Cynar/bitter of your choice is very delicate, completely subjective: add right amount, and you’ll instantly get the idea why I crammed that element into this drink… use too much, and it “snuffs out” the overall taste.

So what this drink has to do with War Machine? Same logic as in Cyborg: machines, whatever their type, need a power source… in Cyborg I rubbed it in reader’s faces with Battery energy drink, but in this case we’ll settle for another kind of energizer.

I’m striving for “mechanical” taste with this drink also… Adding bitter not only makes the drink more interesting, it also transforms the drink more like “battery acid”… in a good way, of course 😀

I was not really pondering about the colour when designing this, but now when I think of it… War Machine is dull greyish-brownish metallic colour… Coca-Cola Energy Drink is a bit more transparent than regular Coke, kinda unpleasant actually… well, colour is close enough, lucky coincidence; not my primary concern with this cocktail.

That’s it, I hope you’ll enjoy these 😀